A recent Wall Street Journal article might throw a monkey wrench into the plans of those Presidential Candidates pushing for free college education as the big answer for Income Inequality.

The people of Kalamazoo, Michigan tried a free college education program for their young people and had some unexpected local economic outcomes along with nearly no impact to the number or type of people pursuing a college education.

When businesses collapsed and others moved away Kalamazoo was in a death spiral as a functioning city. Kalamazoo was on track to duplicate Detroit’s demise. But when several anonymous wealthy citizens offered to pay the full college tuition for any Kalamazoo student who attended kindergarten through high school at one of the city’s schools the number of families moving into the city went way up along with the city’s economy. Those who started school in the city after kindergarten were given prorated tuition reimbursements. For all the details of the program see the WSJ article.

This was truly a wonderful effort by private citizens to make a difference in the community but after thirteen years what really happened?

First let’s be clear about the two specific goals for a Free College program:
1) To allow young people to graduate from college with greatly reduce debt loads so they can better navigate adult life without crushing debt.
2) Provide a better way for more young people with diverse economic backgrounds to use a college education to move up the income ladder.

The first goal can be very positive for the economy as a whole if the college expenses are paid for by wealthy individuals. If the bill is paid by the US government a potential short-term benefit can turn into a long-term curse. More on this later.

Beside the economic lift to the Kalamazoo community caused by fewer families leaving and many more moving into the city, goal number two was more relevant to this income inequality relief experiment.

But what really happened?

According to the Kalamazoo Free College program administrators, since the program took effect in June 2006, they have paid $124 million in tuition subsidies for 5,735 students. Slightly more than half were from families with incomes low enough that the students received free or reduced-price lunch in high school. Kids from lower income families were taking an important step in hopes of moving up the income ladder.

Those receiving the most dollars from the program have been female, white and from middle- and upper-income families because those groups are far more likely to go to a four-year college, rather than a community college, and to graduate.

Graduation is the key…

College enrollment from the Kalamazoo program has soared across all racial groups. Among all students who graduated from a Kalamazoo public high school from 2006 through 2017, 75% enrolled in college within six months, versus a national average of about 67% and only 58% in Kalamazoo before the program. 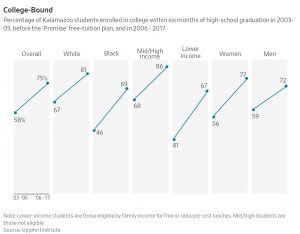 How many students enrolled in college.

But when looking closer at how many students from the 2006 through 2012 high-school classes actually earned a bachelor’s degree within six years of their graduation, it found the rate for white students, 46%, was triple the rate for black students.

And among high-school graduates from mid/high-income households—defined as those not eligible for free or reduced-cost school lunches—the percentage of students earning some kind of college credential jumped to 56% from 43%, a contrast to the nearly unchanged figure for black students.

Maybe just a Free College program is not the answer… As this Kalamazoo program clearly reveals there are many more facets to the societal problems preventing students from being prepared for college and going on to graduate.

Especially in an election cycle, politicians are always ready to push simple looking “write a check” solutions. The last time it was all about “writing checks” for infrastructure. How did that work out?

How many students actually graduated.

And if wealthy individuals don’t step up to pay the college bills can the government really cover the costs?

Those costs can be substantial… Probably a mind-boggling number in the hundreds of billions? Something that could eventually dwarf social security and Medicare.
Someone has to pay the bill… What’s a bigger threat to young people, college debt or increasing government debt?

The perils of growing government debt range from runaway inflation that will result in higher borrowing costs for everyone to a fiscal collapse of our government. Not good things.

Wouldn’t it be smarter to just have these young people pay for their own college education?

Maybe the real problem is convincing colleges to get their costs under control to reduce the price of a four year degree.