Sometimes people can oversimplify the Income Inequality problem suggesting potential solutions like just redistributing income. The Robin Hood “take from then rich and give to the poor” solution. If it were that simple, then all lottery winners would be living happily ever after. But that doesn’t always happen. More on this lottery winnings paradox in a future article

Now on to the three unrelated news reports…

News report Number 1: From the New York Times – “In the Shopping Cart of a Food Stamp Household: Lots of Soda”

We have this $74 billon US Government program (SNAP) to help the 43 million people at the lower end of the income scale buy food. Basically, they get a debit card loaded with money from the US Government that they can use at any grocery store. There are limitations on what can be purchased with the program.  Things like pet foods, alcoholic beverages, paper goods, cleaning supplies, and soaps are not allowed.

But most forms of food are allowed by the program. The goal is to assure that everyone has the meat, chicken, vegetables, bread, etc… to build nutritious meals and keep families healthy.  There is no expectation that busy people will try to stretch their SNAP budget by doing things like baking their own bread or eating home built casseroles every night.  Frozen foods and other convenience items are allowed with the program.

But according to this New York times article a recent study showed that SNAP program participants are spending 20% of their SNAP budgets on sweetened soft drinks and junk food. That’s a lot of money that could go into much more nutritious foods like fruits and vegetables.

I would never want to keep anyone from an occasional Twinkie, Jays potato chips, or Pepsi but 20% is a huge number. $14.8 billion huge.  That’s a lot of apples, oranges and carrot sticks. And in a country where obesity and diabetes are like a plaque all that sugar can’t be good.

But we can’t tell people how to fill their shopping carts at the grocery store. It’s up to them to decide how to feed their families. Junk food or Good food? It’s their choice and they have not been choosing wisely.

This news report talks about a study that says 60% of Americans, a majority, could not pay for an unplanned expense of $500. They don’t have at least $500 in savings!

I know $500 sounds like a lot of money but that’s about what it would cost for some emergency dental work because your teeth are having a hard time dealing with all the sugary soda and junk food you have been eating.

This savings issue has been a persistent problem in America. People, 60% of them, can’t seem to save any money. Nothing gets squirrelled away for eventual emergencies. And this doesn’t even begin to address the problem these same 60% of

Americans will have some day when they can’t work anymore and decide to “retire”. If it still exists, Social Security might send a few dollars their way but not nearly enough to cover all their living expenses. Their savings will need to bridge that expense gap.

For these 60% of Americans, is their budget so tight they can’t even put $5 a week in their mattress, or a bank, for the inevitable rainy day? There must be someplace in their weekly budget where even a few pennies can be trimmed. Enough pennies add up to dollars then before you know it… $500!

And an even scarier thought… If somehow, they work a little harder, overtime maybe or a second job, what will they do with that extra cash in their pay envelope? Will it find its way into savings?

News report number 3: From The Guardian – “Richest 62 People As Wealthy As Half Of World’s Population”, says Oxfam” 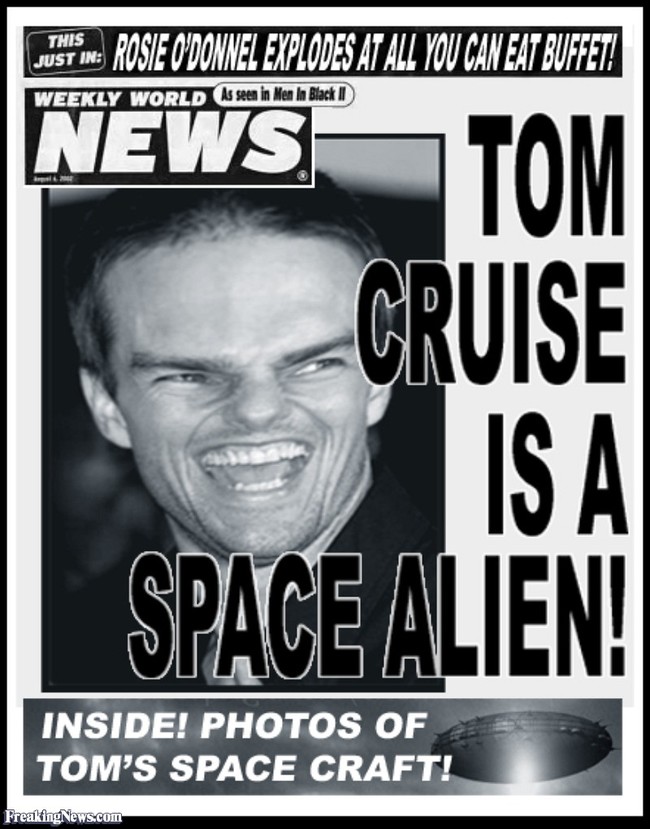 Remember all that recent noise about “Fake News”?

This is the kind of news that smart people understand as sensationalistic and largely inaccurate just from the headline.  But those less educated and more easily influenced by nonsensical numbers believe this stuff. Shame on you Oxfam for creating and/or propagating “fake news”.

This is right up there with supermarket tabloid headlines like “Dick Cheney Is A Robot!”, Tome Cruise Is A Space Alien!”, and “Half-Human Half-Fish Found In Florida!”.

Somewhere someone believes these news reports. If they didn’t these publications would not exist.

The only thing missing from this Guardian headline is the exclamation mark at the end. They coulod have used a headline like; “62 Aliens On Earth Own Everything!” or “Why Work Hard To Get Ahead?… 62 Aliens Control Most Of

Notice my clever use of exclamation marks.

The problem is that people believe these kind of stories about who holds the wealth in the world. Smart people know that these 62 people probably have private planes, yachts, and a nicer wardrobe. But most of their so-called wealth is probably tide up in something like stock. For example, most of Bill Gates’, Warren Buffet’s, Mark Zuckerberg’s and Larry Ellison’s wealth is based on their stock holdings. The problem with owning a large pile of stock is that if they ever tried to sell it the value would drop like a stone.  Stock based wealth is mostly a mirage.
But smart people know about how stock based wealth numbers are really artificial. It’s not like these 62 people own something with real value like property, buildings, stockpiles of canned lima beans, or mountains of gold coins.  I am most worried about the people that don’t known this about how these articles are designed to mislead.

These three news reports appear to be the “trifecta of the day” when it comes to Income Inequality… They show how bad decisions, bad budgeting, and inaccurate sensational headlines and news stories can undermine efforts to eradicate Income Inequality.

No rational amount of income can compensate for bad decision making. Education, discipline and good decision making can make even the smallest income go farther. If a person can’t adjust their budget to save even $500 how will they ever build the assets needed for the unplanned essentials in their life? Financial catastrophe could be days away. And… If a person believes every news story they see, could that demoralize them and take away the hope and optimism that really fuels a long persistent climb up the income ladder?