I am going to risk turning off some readers with this next statement. Please read on because this article will get better… I guarantee it.

Classical macroeconomics spends a lot of time on the traditional Guns or Butter decisions governments use to allocate expenditures and power their economies.

Okay that’s done… So what?

Back in the good old cold war days of the 1950s, 60s, and 70s countries like the Soviet Union learned the hard way that putting too much money into “guns” can trash an economy. That’s’ right, by directing significant government expenditures to the material and personnel related to national defense the Russians drained the Soviet economy of needed capital to power their private sector companies. The unfortunate results of this are visible everywhere in Russia. Even their vast oil reserves are not enough to get their economy back on track.

So what does this mean for income inequality today in the USA and elsewhere?

A few weeks ago I was traveling in a country which I will not name (because I may want to go back there someday) but just describe as 99% Muslim population, huge income inequality with many people living in near poverty, and lots of sand. Just for comparison this country’s annual per capita GDP is less than $9,000 while the annual per capita GDP in the USA is around $60,000. 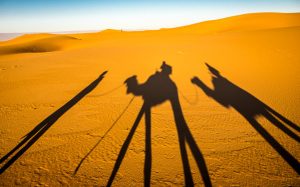 Thanks for sticking with me. That’s all for the numbers now…

As I traveled through this sandy country my driver constantly pointed out how each city, town, and village had at least one and sometimes many shiny new magnificent Mosques. These religious structures were usually the newest and most solid looking buildings in places where most of the other structures were crumbling.

My driver made the point over and over that the government had decided to fund and build these Mosques in places where what people really needed were hospitals, doctors, and nurses. The areas we traveled in were over a three-hour grueling distance from any type of medical care. Even spending those Mosque building funds on schools might have been a little smarter. It’s much easier for kids to learn in a place with heat and roofs that did not leak.

The best example of this odd expenditure allocation issue was in one of this country’s capital cities there was a grand Mosque that reportedly cost nearly a billion dollars to build. This money was mostly from a special tax on each person in the county.

This grand Mosque was truly beautiful. It was a real statement but how did the building of this mosque and the thousands of other mosques throughout the country really help the people improve their lives?

This is the new “Guns and Butter” dilemma….

Instead of directing funds to things like education, healthcare, and real sustaining economic development this country has consistently dedicated resource to non-producing assets. Once you build the Mosque you have a beautiful building but it does nothing for the economy. Great schools that can be accessed by all and help them climb the income ladder. Reliable healthcare can spur an economy, keep people healthy and producing which will reduce income inequality.

Before you go shame-shame on this country’s leaders are there some similar examples of bad “guns and butter” decision making in the good old USA? Could this be really what is fueling a big part of income inequality right here at home?

What it comes down to in this modern day “guns or butter” formula is how governments allocate resources to real sustaining initiatives that measurably improve the chances for people to make their way up the income ladder.

Things like general defense spending (Guns), getting involved in far-away military conflicts, building useless walls between the USA and Mexico, building bigger, better, brighter government buildings, and other useless wasteful non-producing government expenditures all come at a cost to the economy that in the long term will promote income inequality.

If all this money were spent on better education, better healthcare, and more private company directed profit-making research (instead of government directed useless research) would the USA be a better place?

Let me leave you with one scary fact… In the book titled Collapse: How Societies Choose to Fail or Succeed the author details how thriving civilization of the past just disappeared… Among other extinct civilization he reveals his research on Polynesian cultures on Easter Island to the flourishing American civilizations of the Anasazi and the Maya and finally to the doomed Viking colony on Greenland. All these former powerhouses share a similar downward spiral as they made bad decisions on how to allocate resources. Those stone heads on Easter Island look great today but all the people are gone.

Could this be the future our governments are building for us? The wake-up call could be that the USA is currently spending over a trillion dollars more teach year than they collect.  This looks like a warning sign to me. How about you?