Although Hostess Twinkies may possibly be the most unhealthy snack a person could ever eat, they are our unhealthy snack. The news out today is that the company has decided to liquidate after failing to get a wage and benefit agreement with their striking workers. Not good news for Twinkie lovers like me.

And I must not be the only one who likes these golden cream filled cakes since they sell about 36 Million packages a year.

One time someone even made me a birthday cake assembled out of Twinkies. There were thirty of the luscious little cakes arranged three rows high covered with frosting. Yum!

Twinkies have been around since 1930 when they were invented by James Alexander Dewar in Schiller Park, Illinois. At first Twinkies were filled with banana cream but a World War II related banana rationing forced Mr. Dear to use vanilla cream in his snack cakes and he never switched back except for a promotional run of banana cream filled Twinkies related to the 2005 release of the movie King Kong.

So why did the Twinkie maker need to liquidate the company?

The company has been in and out of Chapter 11 bankruptcy for the last few years and was financially strapped because of inflexible unions who would not let the company moderate their contacts.

Well… The Unions won and would not let the company make changes to their contacts so as of this morning 18,500 workers will lose their jobs. And it's not a great time to be out of work.

You can't blame this one on Chinese imports or unfair competition. I have seen the enemy and the enemy is us.

This isn't just the end for Twinkies. All the Hostess brands including Wonder Bread, Ding Dongs, Sno Balls, Fruit Pies and those wonderful chocolate cupcakes will be affected. 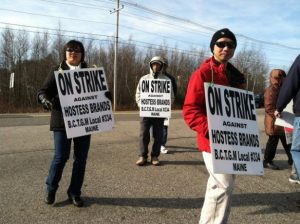 But… What could really happen?

I think these brands are so strong that some other baking company like Sara Lee will probably buy the brands and the secret formulas. They will probably get a fire sale price for the assets.

Don't expect Twinkies to be off store shelves for too long. But you might want to take them off your Christmas gift list. But I'm sure they will be a hot item on eBay.