Could the recent news about a Jet Blue pilot going berserk really be the airlines effort to spice up the inflight entertainment offerings?

With a virtual war going on between airlines to offer more and more for less money Jet Blue may be trying some new options. Live entertainment!

Jet Blue already has some of the best in-seat entertainment with a large selection of DirecTV channels just a few clicks away. And now to top that they have enlisted their flight crews to bring all the drama, excitement and edge-of-seat action right to the passengers. 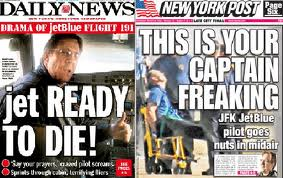 Clayton Osborn, the pilot who was tasked with act one of the “Pilot gone berserk” performance was unfortunately mistaken for some overworked airline employee going through some type of mental breakdown.  But all he was trying to do was entertain a plane load of bored passengers on their way to Las Vegas.

After passengers subdued Captain Osborn reportedly another conveniently available captain who was on board stepped in to fill his duties. Mr. Osborn completed the flight in the back restroom duct-taped from head to toe.

This is a serious possibility as Jet Blue has not had this much publicity since a flight attendant did her live performance a few weeks ago.

But there have been rumors that FOX has options all the story rights on this and is contemplating a new reality show. A cross between Survivor and American Idol where the passengers vote on the winner.